3D print 2021 recollections: what funny gadgets did you print this year?

The year 2021 is drawing to the end, and I attracted by the charm of 3D printer technology this year made a review on what funny gadgets I've 3D printed so far. All of my 3D models are downloaded online. What I did was making those stl models sliced in the slicer App, transforming the model format to the one that was readable by my 3D printer, and then printed them printed with my 3D printer. Follow me to see what funny gadgets I have 3D printed in 2021!

An obvious advantage of having a 3D printer is I can create whatever phone holders as my like. Larger or smaller, yellow or blue in color, all decided by myself. I made 3 types of holders in total.

The body posture is quite funny. I laughed a lot when seeing this phone holder model and finally printed it out using Aries 3D printer. As I used the phone holder for 2 days, I found it has no space left to plug in the power cable for phone charging. So I print another one.

This is a blue one that could hold my iPhone as well as my iPad. It’s available to charging my iPhone or iPad while using the holder 2.

I printed all parts of the motivational phone holder using Flashforge Adventurer 4 and make them well assembled. I am quite satisfied with this phone holder work, which is a mechanical device with rack and pinion gears and the panel part of the holder would flip back and forth. I have written an article about it: A funny 3D print gadget for those who are heavily dependent on mobile phones! More detailed info such as where to download the model file and how to print it are all in there.

Also, I tried two earphone holder models. The first one was printed by a FDM 3D printer and the second one by a resin printer. 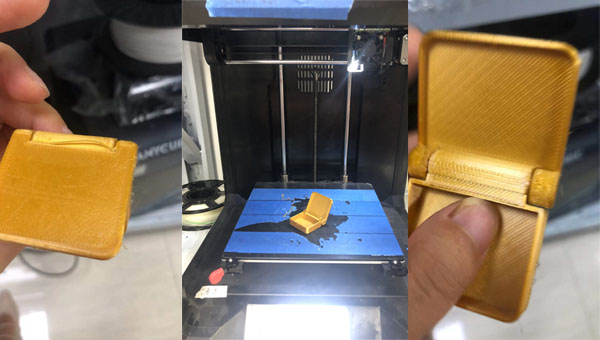 The first one is printed in a size that is too small to holder my earphone cable, and some defects, like burrs and edges separated, appeared on the final print. The second print with resin printer got much better in surface finish and the overall quality. 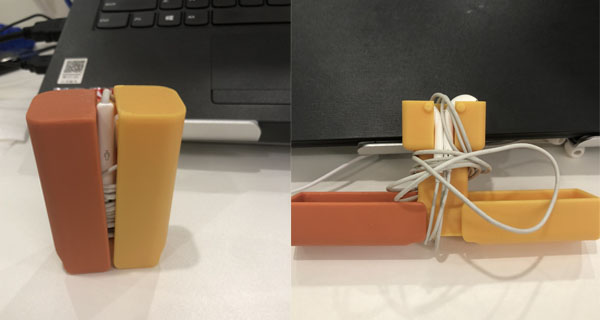 This holder is composed of 3 parts, with 2 wings and 1 core. I set them at the same scale so that the printed parts could be well assembled.

At that time I was really surprised at how a 3D printer could print an object with flexibly movable joints. I saw the process  how the articulated joints of the octopus are being printed. My little catty likes them very much!

The slug model is also with articulated joints, but a little bit different from that of the octopus'. The first time I printed the slug, some joints that should be articulated and moving flexibly are adhering together.

After the first failure, I changed with another pink filament, swapped a 0.3mm nozzle (smaller nozzle mouth size than the first time), and lower the printing temperature. It turned out good! And I even made a magnetic hat for the slugs!

This mask was printed for Halloween. The model was easier to print.

Since I have 3D created so many gadgets, I need a container to hold them. So, I printed a collapsible basket, which is a thing with plane structure for printing and then could be stretched to a stereoscopic basket when finishing printing.

This basket is composed of 11 parts, but I don't need to print them one by one. I just imported them all to the FlashPrint slicer at the same time and they layed out based on one coordinate plane! That's to say their places were set well automatically when importing them in to the slicer APP. They were printed as a whole but turned out to be a folding and collapsible 3D object when finishing the printing! Have to say that the basket model designer is quite terrific!

Actually what I tried printing in 2021 was more than those above I mentioned. 3D printing experience was marvelous and I deeply recognized that only through practical printing will you get really useful experience. For instance, if not having it done practically, I would not know for the same sliced model the final prints’ size would be slightly different when printing with PLA and with silk PLA. Those slight size errors would lead to failure when assembling printed parts together.

Previous article: Help in Deciding Which Flashforge 3D Printer is Right for you

Next article: Detail exposed: How do big cheese work with Wax 3D printer